LOGAN SQUARE — This winter, like every winter, the Chicago tradition of claiming dibs has inspired a tired discussion about whether claiming shoveled-out parking spaces is a right or the end of civilization.

Of course, we all hope we’ve suffered through our last dibs-qualifying snow this winter.

But in the unfortunate event that is not the case, Logan Square folkie Andrew Francis, who is best known for his protest songs “Mr. Mayor Says,” “Talkin’ CTA Blues” and “Talkin’ Red Light Blues,” has written a gospel song aimed at easing your winter parking anxieties.

His rendition of “I Got Dibs” is a catchy, old-timey gospel tune — inspired by an old hymal, “I Got Shoes” — that surely makes shovelin’ mighty easier.

Interview about “Rahm Songs” on The Afternoon Shift, WBEZ 91.5

Andrew appeared on the WBEZ program The Afternoon Shift on May 27, 2014, and talked with host Niala Boodhoo about a new album of songs titled “Rahm Songs.”

Logan Square songwriter Andrew Francis first started writing protest songs directed against our previous mayor. But as it turns out, Francis finds his songs are still particularly relevant today. He wrote “CTA Blues” back in 2006, and with very few tweaks he was able to rehash the song for his mini-album, ‘Rahm Songs.’ He joins us in studio to talk about the inspirations for his music and lyrics, and his experience reworking his old songs.

Listen to the interview and live performances of the updated, Rahm Emanuel versions of “Mister Mayor Says” and “Talkin’ CTA Blues” above, or by clicking here. Download the interview by right clicking here and selecting “Save As…”

And, download the album “Rahm Songs” for free right here.

LOGAN SQUARE — Folk singer Andrew Francis has been writing and singing his “Talkin’ Headline Blues” for quite a while now.

“Think there’s about 120-something of ’em,” Francis said.

I met the Logan Square songwriter around the time former Mayor Richard Daley leased the Skyway and sold off the city parking meters.

Back then, Francis had recorded a couple protest songs outlining his frustrations with riding the CTA, and, well, Daley being Daley.

In his ditty, “Mr. Mayor Says,” the modern-day folkie skewered Daley for being “guided by the love of gold.”

And his song, “Talkin’ CTA Blues,” jabs at Daley and the transit agency for how poorly they responded to a 2006 derailment that left Blue Line riders stuck in a smoky underground tunnel for about an hour, among other things.

“Recently, I was thinking about how I don’t get to sing those songs anymore,” Francis said.

“I really wanted to sing them again, so I updated them to include Rahm Emanuel.”

The thing is, Francis says, the new Rahm version didn’t need to much tinkering to express the same lingering sentiments many Chicagoans still have toward the CTA today.

His updated transit protest song starts with a more recent Blue Line catastrophe — the one involving a sleeping train engineer and a train that climbed an escalator at O’Hare Airport two months ago — and goes on to rip Emanuel for having misplaced priorities.

“Well, I’m willing to cut him some slack, as he’s got a whole lot of great city improvements on track/like a billion dollars to build a basketball arena by 2016,” Francis’ song goes.

“And making sure the Downtown area of Chicago is always sparkling clean. Gotta keep the tourists happy and feeling good. They ain’t never coming out to the neighborhoods.”

Francis keeps on singing, “Riding the trains. Going to the schools. Getting shot. Oh, living in the city that works … for about 1 percent of the people” before his whining harmonica brings the song to a screeching halt.

“It’s funny how the same things seem to be going on even though different people are running the city now.”

“More things change the more they stay the same,” he said. “Can’t really get away from any of it.”

And Francis said it doesn’t look like he’ll be running out of inspiration to make his point anytime soon.

“Just last week when the news reported Mayor Emanuel’s security detail gets lots of tickets for running red lights and speeding in school zones I couldn’t believe it,” Francis said. “I wrote a song about almost the same thing years ago when it was in the news that CTA buses ran more red lights and got more red-light tickets than anyone else.”

So he dug up that song, too, and recorded a new version of “Talkin’ Red Light Blues” inspired by Emanuel and his speeding, red-light blowing security detail.

“Now I’m sure our mayor, who says, ‘Safety First!’ will put a stop to this getting worse. It’s not like he’s ever been caught speeding through lights, breaking the law,” Francis sings while strumming his guitar. “So if you ever see his car go whizzing by, please keep in mind he’s a very busy guy.”

Francis didn’t bother changing the last few lines of that song, a fact that makes his point about how some things never change in Chicago.

And it goes like this, “So, I’ve sung you my song and it ain’t very long. … It wasn’t meant to make you mad, just to point out that we’re all being had.

“And it’s gonna last until everybody starts to ask, ‘Why do I gotta put up with that?'”

Andrew played a spot on the April 20, 2012, edition of WBEZ’s program Eight Forty-Eight. For this segment he performed “The Talkin’ Headline Blues #77” (as done every week on the Music Vomit tumblr blog) throughout the program and also gave a short interview about the origins of the song. To listen to the live, radio version click here, and also watch a video of the complete song.

To listen to the entire podcast of the April 20, 2012 Eight Forty-Eight just click here. (Or download by right clicking here and select “Save As…”) At the end of the segment there’s a short clip of the song “40 days and 40 nights.”

Full text of the article, written by Joe Deceault as follows:

News these days can tend to come in small, digestible-yet-throwaway chunks: Despite a 24-7 news cycle, endlessly scrolling headlines and ever-present links on social media, some may feel a bit short-changed on the substance of the news they’re fed.

That’s certainly local musician Andrew Francis’ take on this fast-paced news feed world we live in. But why fight the fleeting, ephemeral headlines when you can capitalize on it?  Artistically, anyway.

Francis took to turning his apathetic feelings toward the hapless headlines in a satirical direction. The result is The Talkin’ Blues Headlines.

He joins Eight Forty-Eight to add a musical note to the “news you can use,” and talk a bit more about his inspiration and process.

While Francis doesn’t actually perform his Blues Headlines out in public, you can catch his duet Poor Elvis performing at several events throughout the month of May, including a show on May 24th at Quenchers in Chicago.

They also have a Kickstarter campaign for a new 7-inch record they will press later this spring for an upcoming Rustbelt tour.

Review of It’s Chicago! from the Record Dept. Music Reviews blog in Seattle

Chicago based singer/songwriter Andrew Francis self-released his second album, It’s Chicago!. Francis – also a member of The Barehand Jugband (mouth harp, guitar and vocals) – possesses a distinctly nasal voice reminiscent of Bob Dylan and is an accomplished guitar player. It’s Chicago! showcases his entertaining yet simple solo blues and folk songs, which are written in the tradition of the Guthries, ruminating on everyday life, the working man, and living in Chicago. Francis is a prolific and disciplined artist who uploads a new song every Monday – check them out at: http://andrewfrancismusicvomit.tumblr.com/.

I live near Chicago. I follow the local scene pretty closely. In the last six years of blogging I have only found a handful of Chicago artists to get excited about. I think I’m about to get excited about Andrew Francis. Andrew is a member of a local jugband (The Barehand Jugband) so that’s automatically a plus in my book. His delivery is a nasal concoction equal parts Bob Dylan and Pokey LaFarge. Musically the songs are simple guitar and voice (with occasional amateurish harmonica – and I mean that in a good way). On the song “I’m Only Trying To Say What Comes To Me” he admits his songwriting naivite but then goes on to speak from the heart and string together an unusual but affecting chorus. Andrew has just released two records. The first is his solo self titled debut and the second is a collection of songs inspired by and about Chicago called It’s Chicago!.

Buy them here and here.

Here’s a clip of a radio interview I did back on September 22 of 2008. Click here to download and listen to the full audio. 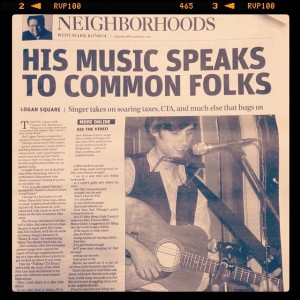 His music speaks to common folks
LOGAN SQUARE | Singer takes on soaring taxes, CTA, and much else that bugs us

Typically, I agree with Camper Van Beethoven: “What the world needs now, is another folk singer, like I need a hole in my head.”

Chicago needs more folk singers — guitar strummers, banjo pickers and harp blowers with husky voices; heck, even a good rapper or metal head spitting fake blood — so long as they’re telling the story of what neighborhood folks are up against today.

I caught Francis’ act at the Pullman Hobo Gathering, where he performed a bittersweet tune about a wanderer finding true love in our gritty city.

“I live in a city called Chicago,” he slurred. “And it’s a hard ol’ place to call home.”

Chicago is a hard place to call home. Especially these days, when so many neighborhood folks are being laid off, foreclosed on, overtaxed and, well, stuck on slow CTA trains as the last of summer slips away.

The 28-year-old doesn’t call himself a folkie. But when he’s on stage, the guy is equal parts Bob Dylan and Arlo Guthrie, with the sly smile of Johnny Depp’s character in “Benny & Joon.” An entertaining fellow. You should check him out.

He’s written a few foot-stomping protest songs that capture the angst of Chicago neighborhood living at a time when there’s plenty to get worked up about in our town.

Take his “Talking CTA Blues,” which tells the story of the 2006 Blue Line train derailment to express our collective mass transit frustrations.

Now I went down to a Blue Line station
to see what kind of delays I’d be facing.
They told me everything was fine
that I would be right on time
as long as I didn’t mind
a little smoke in my face
and being stuck underground for fifty-nine minutes straight. . . .
I sat in a seat that was facing backwards
so I wasn’t quite sure where we were.
Felt like I was going back
straight into the past
before I had an iPod
or a cell phone
or any electrical gadget
that could distract me
from how bad Chicago’s public transportation is.

In a li’l ditty about Cook County’s sales-tax hike, Francis offers Mayor Daley a suggestion for filling the city’s own budget deficit:

If the mayor is really smart
then he’ll start
taxing anyone for having a heart.
And then
if he gets brains enough
he’ll even start charging for that red stuff
coming out my vein
looks green to me
Maybe you could use it to pay for all those police brutality legal fees.

That’s the kind of stuff folks talk about with their friends and neighbors. A folk song can make you feel like you’re not struggling alone out in the neighborhoods. Francis says he’s not doing anything special — just “singing words that need to be sung” in a “hard ol’ place to call home.”