Again…another quick look back at the vinyl I randomly pulled from my crates and listened to:

“Christ Was Born On Christmas Morn” 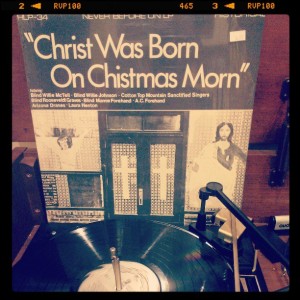 Well, here’s a record that’s right up my alley. Old, ancient blues and gospel as sung by blind blues and gospel singers. Several of my deep and dearest favorite tunes on here like “Woke Up This Morning” by Blind Roosevelt Graves (and his Brother), “Wouldn’t Mind Dying, If Dying Was All,” and “Lay Some Flowers on My Grave.” All songs I’ve sung and performed live at some point. Be warned, though, that this is no Christmas album, but to listening to it on Christmas would surely make Santa glad. Arizona Dranes…I wish she was my secret. You know about her, right? Anyway, this record is in the top five in my collection.

And then some jazz guitar. Charlie Christian could be your god if you were a guitarist. Or should be. I don’t understand much of it, mainly because my guitar playing is like an axe looking for a place to chop a log, but I get the feeling of it. This album settled me down. It was Sunday night. I had to be up early the next day. It was still hot outside. The sky was clear. I heard the train line honking. The cover of this album is red. And there’s no title to it, his name is all you need to know. (Ps. I also thought it weird that after pulling out a gospel and blues record that references Christianity in the title, I pulled out a Charlie Christian record. Is someone telling me to get back?)

Frank Sinatra, September of my years 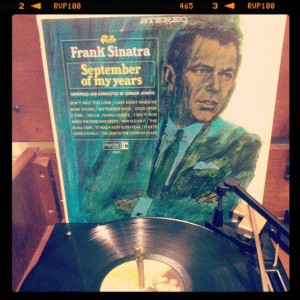 I almost didn’t make it through both sides of this, but only because I was tired and it was getting close to midnight. There’re some killer songs on this, though. They’ll go straight for the big vein in your neck. That’s all I have to say about it. Other than, I think it was one of my dad’s old records that I packed up and never said thank you for. So, if it was, thanks Dad. If it wasn’t, well, thanks for all those other ones that I took.