Oh, hey, look at this here. I guess I do other stuff than just sit around feeling sorry for myself and popping pills. Sometimes I brew beer and listen to vinyl records that I pull out of my stacks randomly. And then I write about how they made me feel. And I call it a Random Record Night Recap.

I’m working through my whole collection of vinyl in this way. Conversations in my house about Random Record Night sometimes go like this:

Wife: “Random Record Night is cool and all, but, tonight, can we just listen to some records that we DON’T pick out randomly?

So here we go:

Ramblin’ Jack is kind of the reason that I play guitar and sing the way that I do. When I first started performing, I sang out of the side of my mouth like him. I tuned my guitar a half step down like him. (DON’T DO THIS. People HATE it when they pick up your guitar to play a song and can’t figure out what’s wrong.) I even wore a cowboy hat for a brief amount of time. (I don’t like to admit this because I am not a cowboy AT ALL.) Ramblin’ Jack is just fantastic. This record isn’t the best one of his that I own, but it’s still pretty good. Maybe it’s his most “commercial,” but I don’t know what that really means. It’s not a recording done on a boat in the English Channel. But not everything can be that. 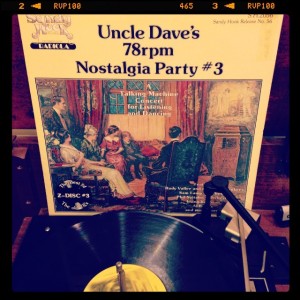 Look at the cover of this. That’s the type of music it is, okay? I don’t know any other way to explain it. Get all dudded up. Invite over some of your dudded-up friends and sit around in arm chairs in front of an old Victrola player. This is the music that will come out. You and your friends will enjoy it. You will remember that night FOREVER.

Here’s a kids music vinyl. This is Ella Jenkins playing a bunch of old tunes on banjo, guitar and harmonica on one side. And then doing the same thing on the other side, except with a bunch of kids in the room. Lots of idle chatter on this record. Only reason I’m not a fan of that is because when I’ve got a big kettle of beer brewing I can’t always hear what they’re talking about. So I’ll hear things like, “Oh yes, oh yeah, yes. Mama gonna do that right now. Get the barbecue hot!” And then a song starts. Hmm. 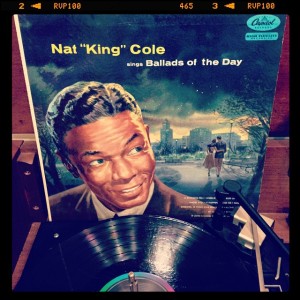 I don’t know why I have so many Nat “King” Cole records. I don’t like ANY of them. I know there are like 10 more in my collection that I’ll have to listen to. I DREAD that. I will say, though, if I had lived in a time where the “Ballads of the Day” were these ballads, well, I would probably love them. Think about all the HAND HOLDING and ROSY-CHEEK KISSING. What are our “Ballads of the Day”? Does anyone sing ballads anymore? Do these modern-day ballads also get you some sweet sweet PALM?

The title says it all. Its just one long medley of every children’s song there is. EVER. Not a great record to listen to at the end of a long night. It’ll make you feel more insane then you already do. You will have NIGHT SWEATS.