How about this? A new version, recorded in July 2018, of an old tune, recorded in May 2013, about the month of April, and I’m releasing it in December.

On this tune you get to hear the beginnings of a new collaboration I’m working on with Andy Trebing. We’ve been writing songs and composing music for a few months now. He’s got some cool tunes of his own and the mix of our two individual sounds goes together pretty good.

This one has some upright bass, played by Andy, and some backing ambient, droney (yes, that’s how you spell droney) guitar, also played by Andy.

And that’s it. First release in 2018. In December. Mid-December. I have 2 weeks to write and release 100 more songs to get back on track. I CAN DO IT.

I’ve gone and rewritten another of my old songs. This time Get Up & Shout form all the way back in 2012. After you’ve had a chance to listen to the new tune, go ahead and click on over to revisit the original.

Just like the tune from a couple week’s ago, Trump is Working on a Building, for the updated version of Get Up & Shout I used an old Carter Family melody. This time I went for an old favorite of mine The Cannonball (or Cannonball Blues).

Didn’t really have any reason for using it other than I thought it would be easy for the words from my original tune to be squashed into that melody. Of course that didn’t work out as smoothly as I figured it would.

Made me get up and shout

For whatever reason I really got bogged down in what the new version of the song was about. What the meaning behind it would become. With these rewrites I really try not to do that because then as I force old words I’ve rewritten, that were about something completely different (usually that I’ve forgotten), into some kind of new meaning the song gets harder and harder to write. And I get frustrated. So this version had many multiples of rewrites. But I think I finally got it where I want it this morning.

From revival to protest

It’s now a little bit Cannonball Blues and a little bit Woody Guthrie’s Baltimore to Washington and a little bit protest song against Donald Trump. Now, he’s not specifically named, but I think I threw in some key words and phrases that alert you to the Orange One’s presence. So the tune went from being a tent-revival-church-happening-type song in the original recording to something that’s a little more contemporary in subject.

Not sure Get Up & Shout is completely done. Might even need a new title now too. Something like the Donaldbald Blues or the Orange Express Blues or the Trump Hump. But at some point you just have to shrug your shoulders and move on to the next thing. Not sure if this version is an improvement or not on the original, but it’s at least some kind of movement on the original and that’s really all I was going for.

I first wrote and recorded Mother Mary way back in 2012. I vaguely remember that I got the idea for the song whil 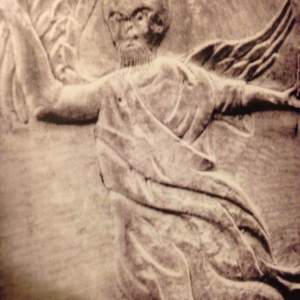 e watching an episode of the TV show Kitchen Nightmares. No, really. REALLY. I think one of the people that had a NIGHTMARE
KITCHEN was named Mary, but she was also an
older lady, so the host of the show, in all his frenetic glory kept calling her Mother Mary.  Anyway, that just stuck in my head and the original version popped out. Have a listen to that here. Then listen to the new version:

So why do a rewrite?

Well, it’s how I practice. How I teach myself to write completely new things. How I keep myself interested. I have a need I think to tear things down and rebuild them. Even if I really like or love the first creation. And I do really like the first version of this song.

And that made it hard to rework. Because I didn’t know how to even start to change it. Maybe that has something to do with letting my practice of songwriting slip into the trash heap the past couple years, but maybe also because Mother Mary is a song I still occasionally remember and play around the house to entertain myself.

Usually if I get stuck at rewriting a tune I’ll change the tempo and time signature. And that usually means the song becomes a waltz, but that didn’t really work for this one. All the words and names I had in the original lyrics fit too well with the original guitar part and melody and I couldn’t get that out of my head. So, I did the easy thing…edit out all the names.

But then can you still call this Mother Mary?

I think without any of the references to the Christian religious figures it’s still basically the same song. You can look at it two ways:

Well how about this? Anyone remember that I used to rewrite and rerecord all my songs in an endless loop of songwriting practice? Anyone? No? That’s okay. I’ve written about a billion songs. In any event, I’ve reworked a song from way back in 2011, Goodbye, Goodbye, which was about the Arab Spring. Read up on and listen to the old version here. This new one is all about the bathroom law that was passed recently in North Carolina (among other places).

Wait, a song about a bathroom law?

First off, what the heck is a bathroom law? Try reading up on it here, here and here. I’ll give you a couple, two-tree minutes to read those.

So, yeah, it’s a law that some laughable people in North Carolina passed to say who can use what bathroom and where and when. Now, I’m too young to remember segregated bathrooms to separate people based on skin color, but this seems similar to that. No?

I may be simplifying it and I may have written a simple song about a complex issue, but what exactly are people in support of a law like this trying to accomplish? Some say it’s to PROTECT THE CHILDREN. I say that whenever I hear someone use that as a reason to do something, it’s probably for some other much more nefarious reason.

Then, why write a song about a bathroom law?

Especially a song that is basically saying, “See ya later, North Carolina. I can’t deal with you anymore.” Is that the true nature of the law? To make the LGBT community just get up and leave.

Is it better to stick around and fight for a place you call your home or just pack up and say, forget it. Who wins in either situation? You either keep your home, but have to live with terrible decisions by terrible people, or you move far away and have to leave your home.

How insane is that to make a law that causes someone to question their home, the place they were raised, the place they identify themselves with? That is not creating or maintaining a safe environment (PROTECT THE CHILDREN). It’s creating discomfort for everyone when one group is segregated. It highlights everyone’s differences. If someone is different than you, then you, in turn are different than them.

So instead of thinking about any of that or questioning yourself at all, go ahead and make people that aren’t like you feel so unsafe that they don’t want to live by you.  But then, of course, that solution only leads to you seeing and feeling your differences. It’s like the book If You Give a Cat a Cupcake. One thing ALWAYS leads to another. And thinking about that book leads me to thinking how at my daughter’s pre-school there are SHARED BATHROOMS. Boys and girls in there TOGETHER. Who’s worked up about that? Who’s protecting the children?

Maybe, in America, we should just all get our own personal bathrooms everywhere we go. (I think they call them colostomy bags.) Then you never have to be around anyone that isn’t exactly like you.

This here is a rewritten song of a tune, No Longer Can I Hide, that I originally wrote WAY BACK in April 2011. That’s so long ago that I have no idea what the original song is even about, if, in fact, it was ever about anything. You can read all about it in the original post right here, though, and see that I didn’t even really know what it was about when I first wrote it.

Also, seems that when I originally wrote this, my 5-year-old, who was then only like 18 months, was just out of the hospital after a serious eye infection. It was swelled up like a baseball. His eye is okay now. But, of course, anytime it’s a little bit red my wife and I look at each other and are like, “HERE WE GO.”

Staying in the hospital with a kid is horrible. Pray you never have to do it. If you do, though, don’t order the chocolate cake for yourself on your kid’s hospital dinner menu. THE NURSE WILL KNOW IT’S FOR YOU. She will scowl at you.

So, since I had no clue about this tune, and I’m just getting back into some serious songwriting, I started off by playing through a few old tunes to see if I could steal any melodies or phrases or ideas. Songs like “The Rovin’ Gambler” and “Freight Train” (been really into that one lately) and “San Francisco Bay Blues.”

Then I got an idea to do a song about how sometimes it seems so much better to just be all alone and hid away than to be anywhere around anyone else.

Turns out that’s not really true all the time. Turns out I’ve got a few people I’d rather be around than be left all lonesome.

So that’s the rewritten song for this week. That’s two weeks in a row. I reward myself with beers.